Tag Archive for: Full text of his book.

You are here: Home1 / Full text of his book.

Overall, Dr. John Polya made a major contribution to
chemical research and chemical education in
Australia. He published over 120 scholarly
works and supervised numerous
research students.

THIS MAY BE A LITTLE SLOW TO LOAD 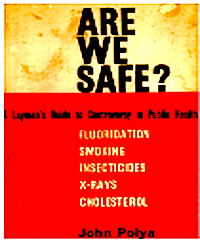 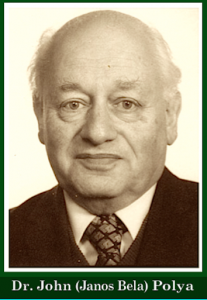 Dr. János Béla Pólya (John Bela Polya), (1914-1992), FRACI, scientist, academic, and internationally recognised authority in organic chemistry, was born in 1914 in Budapest, Hungary (Austro-Hungarian Empire) into a secular Jewish family. He was the son of Dr. Jenõ (Eugene) Pólya, a university professor and famous surgeon (Polya Gastrectomy operation), and Livia Polya from a gifted, orthodox Jewish family. The Polya family was assimilatory and secular, changing their name to Pólya from Pollak in about 1880 and converting to Catholicism.

John Polya studied at a Catholic Piarist school in Budapest which also had Jewish, Presbyterian and Muslim students. He then studied chemistry at the renowned Eidgenössische Technischen Hochschule in Zurich, Switzerland, in the 1930s. In 1936 he completed his tertiary studies at the Swiss Federal Institute of Technology in Zurich. From 1937 to 1939 he was a Rockefeller Scholar in Organic Chemistry at the University of Manchester and the Imperial College, London; subsequently working as a Rockefeller Scholar on vitamin A at the two universities. While in England he became acutely aware of the Nazi threat to Jews. His sister, Susie, and brother, Michael, left Hungary before World War II for America and Australia, respectively. His father visited America and was urged by medical colleagues to remain in the USA. Confident in his eminent professional position, however, his father returned to Budapest and was killed by the Nazis in December 1944 just prior to liberation. John Polya’s mother and younger sister survived the Holocaust in Hungary and emigrated to Australia after the war. The 1930s to early ’40s saw the arrival, in Australia, of a highly educated Hungarian elite, mainly Jewry fleeing repression by a Hungarian government gradually compliant with Nazi Germany’s demands.

Polya arrived in Sydney from the UK in 1939. He recalled preferring Australia over Chile as a destination for a refugee because at that time he spoke English but no Spanish. He initially worked as a chemist for Sir Edward Hallstrom (Hallstrom Pty. Ltd, refrigerators) (1939-1940). He then moved to Melbourne and worked as an industrial chemist for the well-known chemist, entrepreneur, wine expert and humanist Oscar Mendelsohn (1940-1945). His attempt to enlist failed because his “reserve occupation” was deemed more necessary to the nation then his military service. He subsequently worked for the Munitions Supply Laboratories at Maribyrnong, Melbourne (1945-1946) (arising from his discovery of the chemical basis of premature corrosion in RAAF planes). His stellar academic career took off from 1946 when he was appointed Lecturer in Organic Chemistry at the University of Tasmania. At the time, he was staunchly opposed to the fluoridation of Australia’s drinking water and published Are We Safe. A Layman’s Guide to Public Health (Cheshire, Melbourne 1964). In 1952 he was awarded a Doctor of Science from the University of Tasmania, and in 1955 was appointed Associate Professor of Chemistry at the university.

Polya had married Robin Barker in 1940. Their daughter (Michal) was born in 1941, Gideon in 1944, Rosemary (1948), John (1955) and David (1960). All of his children obtained their first degrees from the University of Tasmania and all pursued studies with a scientific leaning. Michal (BSc, DipEd, mathematics teacher), Gideon (BSc, PhD, biochemistry academic), Rosemary (BA, BSc, DipEd, ALA, teacher, librarian), John (BMus, mathematics and computing teacher) and David (BSc, PhD, geology academic).

Polya believed in the responsibility of scientists to speak out in the public interest and in 1977-78 became the president of the Royal Australian Chemical Institute, Tasmania branch. In 1978-79, he was chairman of the Organic Chemistry Division of the Royal Australian Chemical Institute. Highly regarded, respected and fondly remembered by his former chemistry and pharmacy students, he retired from the University of Tasmania in 1979.

As an academic and scientist Polya was known to be a very passionate and opinionated person who spoke bluntly, freely, and without fear of consequences. He was an extraordinarily gifted, multilingual polemist with deep interests in philology, science, philosophy, theology, literature and music.  He was also a great cook and had a great love for Jewish culture as reflected in gastronomy, music, humour and literature.

Overall, Dr. John Polya made a major contribution to chemical research and chemical education in Australia. He published over 120 scholarly works and supervised numerous research students. With Dr Kitty Got (a Jewish Hungarian refugee who arrived in Australia in 1956) he introduced the teaching of biochemistry to the Chemistry Department and notably encouraged women scientists. He believed that a vital truth from the Jewish experience was the importance of “being different”, which he perceived as contributing to a better and culturally richer humanity. He died on 15 December 1992 in Melbourne

A scientist, academic, and internationally recognised authority in organic chemistry.

Associate Professor John Polya, then in the Department of Chemistry

at the University of Tasmania, was very outspoken about fluoridation.

away from him because of this.  ←

Polya believed in the responsibility of scientists

to speak out in the public interest…

Dr John (Janos Bela) Polya ( see photo above), then 54, was a conservative intellectual with a European background and education, starting in his native Hungary. He was an internationally recognised authority in organic chemistry.

“As an academic and scientist Polya was known to be a very passionate and opinionated person who spoke bluntly, freely, and without fear of consequences. He was an extraordinarily gifted, multilingual polemist with deep interests in philology, science, philosophy, theology, literature and music,” the Australian Dictionary of Biography says of him.

Polya was a staunch advocate of academic freedom and a leading supporter of justice for Professor Sydney Sparkes Orr, dismissed by the University of Tasmania after his successful advocacy of a Royal Commission into that institution. The book “Dreyfus in Australia” by Polya and Robert Solomon provides an insider account of the long- running Orr case that had at its heart the key issue of academic freedom7.

As a refugee from fascist Hungary, Polya embraced and very actively exercised the freedom of speech he found in Australia (his eldest son, former Associate Professor of Biochemistry Gideon Polya, has vigorously followed the same ethical path).

Exercise of such freedom of speech by scientists and scholars is crucially important for informed public discussion in the public interest, as exampled by John Polya’s book “Are we safe? A Layman’s Guide to Controversy in Public Health”. Dr, later Prof, Polya was stridently opposed to fluoridating drinking water. He died in 1992. 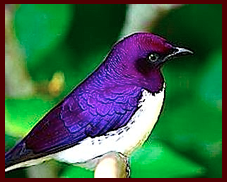