“Iodine deficiency has been called the world’s
major cause of preventable mental retardation.” 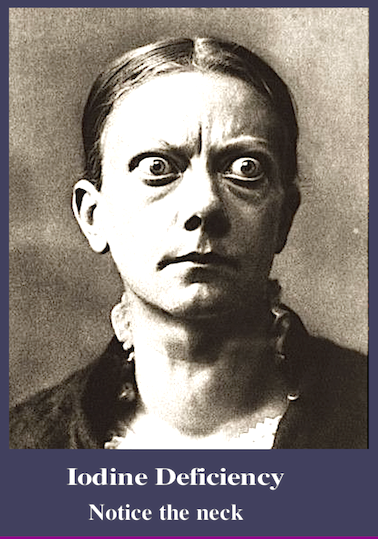 The other, much more biologically active thyroid hormone is tri-iodothyronine (T3),
which has three iodine atoms.
Lack of dietary iodine has long been identified as the problem in diminished thyroid hormone synthesis.
According to the International Council for the Control of Iodine Deficiency Disorders:

“Iodine deficiency has been called the world’s major cause of preventable mental retardation.

Its severity can vary from mild intellectual blunting to frank cretinism, a condition that includes gross mental retardation, deaf mutism, short stature, and various other defects… The damage to the developing brain results in individuals poorly equipped to fight disease, learn, work effectively, or reproduce satisfactorily.”

This crucial role of iodine is another reason why the thyroid gland is especially vulnerable today. Canadian researcher Andreas Schuld has documented more than 100 studies during the last 70 years that demonstrate adverse effects of fluoride on the thyroid gland.32 Schuld says:

“Fluorine, being the strongest in the group of halogens,
will seriously interfere with iodine and iodine synthesis, forcing more urinary
elimination of ingested iodine as fluoride ingestion or absorption increases.”
– John MacArthur 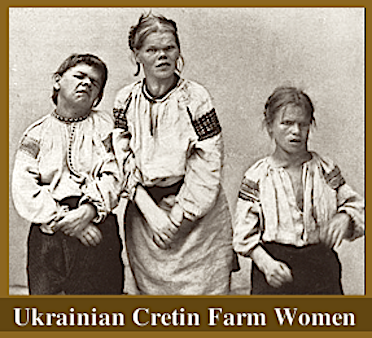 …The American Thyroid Association recommends women who are planning pregnancy, pregnant, or lactating should take 150 mcg of iodine.
Ideally, iodine supplementation should start 3 months prior to pregnancy…

IODINE AND PREGNANCY:
Mild to moderately LOW levels of iodine in early pregnancy may be associated with lower verbal IQ in children…

1.)  It has been known since the 1930s that the thyroid hormones control tooth eruption.

2.)  In China, entire villages are being relocated due to fluoride contamination.

3.)  Fluoridation delays the eruption of teeth because of its hypothyroid effect.

5.)  Any anti-thyroid substance administered during the time of enamel formation
will produce the effects seen in dental fluorosis.

6.)  Fluorides are acknowledged as the cause of thyroid cancer,
Kaschin-Beck disease and iodine deficiency. 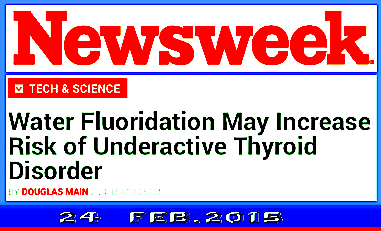 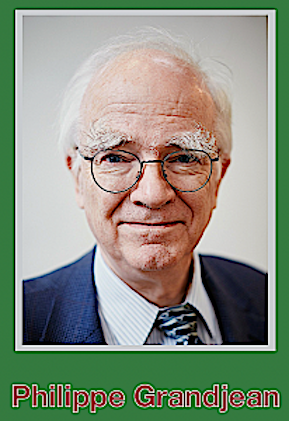 Dental fluorosis is a sign of thyroid dysfunction.
Any anti-thyroid substance administered during
the time of enamel formation will produce
the effects seen in dental fluorosis.

IODINE IS A HALOGEN

The halogens are a series of non-metal elemants:
Fluorine, F
Chlorine, Cl
Bromine, Br
Iodine, I
Astatine, At

“The problem is that fluoride is a ‘bully’. Any time an atom of fluoride
and an atom of any other halogen are in the same vicinity, the
fluoride will displace the other halogen and take its place.”
– Dr. Terry Tennant, MD, MD(H), PSc.,D 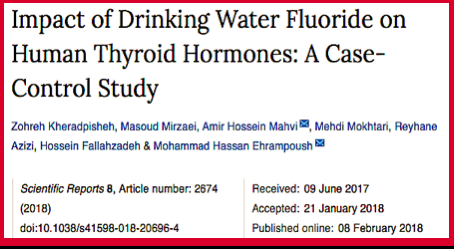 The incidence of thyroid cancer has risen from 2% to 5% per decade.
If this trend continues, thyroid cancer may become the fourth
most common cancer in the United States by 2030.

THE PINEAL GLAND-A Selection from Researchers

This is universal, probably throughout time and most likely throughout
the cosmos.↑ We realise that some dentists will see this as another
threat to their constant claims of fluoridation’s safety, but
to claim otherwise is to fly in the face of true science.
See also → Periodic Table of the Elements
[Notice the temperature slide !]

[ The photo above is from Mars where NASA found calcium fluoride. ] 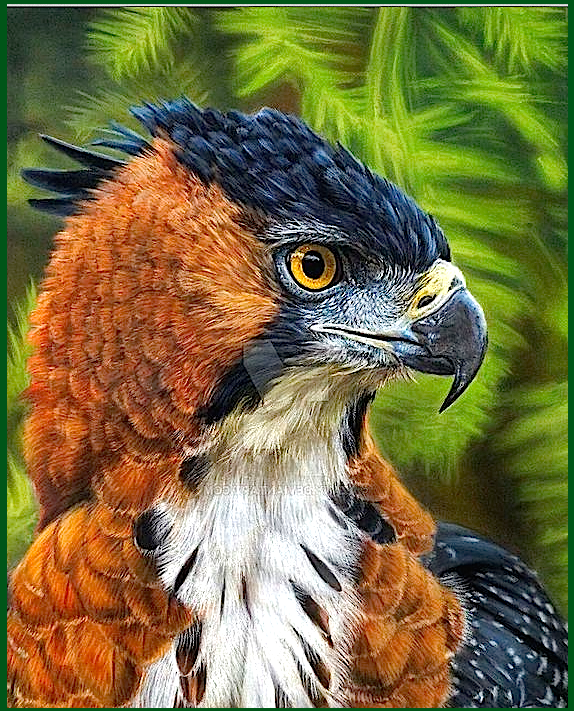