FLUOROSIS INDIA – and some ways to control it

You are here: Home / FLUOROSIS INDIA – and some ways to control it

The TOTAL daily intake through water, food  and air
determines the development of fluorosis.
[As well as a diet low in vitamins and minerals.]

“FLUORIDE POLLUTION AND ITS EFFECT ON WATER AND
VEGETATION IN BIRBHUM DISTRICT, WEST BENGAL” 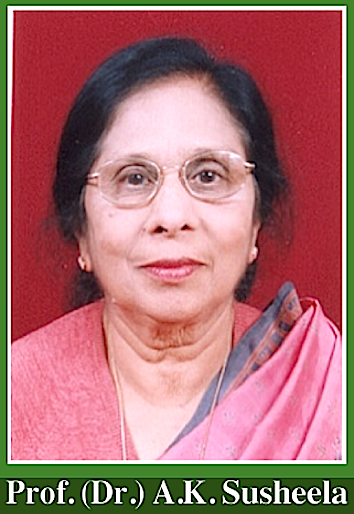 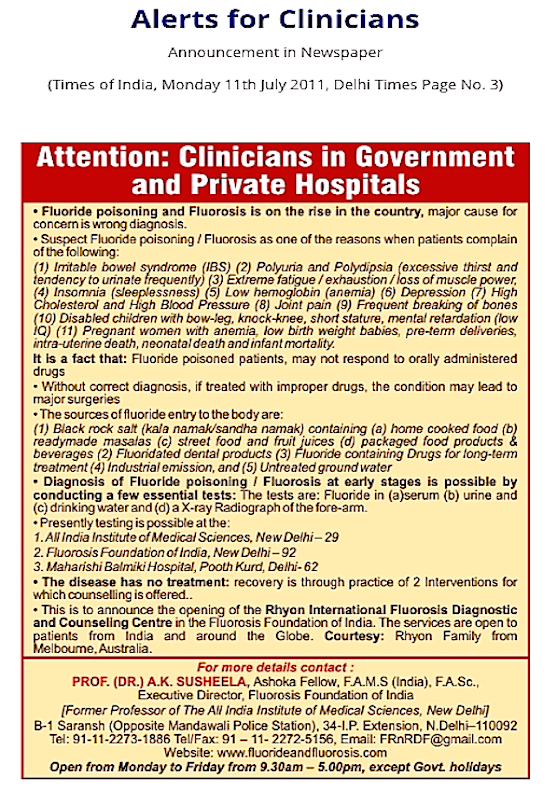 “Like me, anyone over 45 years of age suffers from dental fluorosis here due to the water we drank as children. Thankfully, we are now getting water from the Krishna River, so the present generation is safe,” said Bokka Bhupal Reddy, sarpanch of M. Edavalli village. He recalled that people there were so poor at one point that they preferred to sell the eggs laid by their chickens instead of eating them.

The Egyptians used charred wood as early as 1500 B.C.
for medicinal purposes and as a purifier in other
connections. Similar early use was made of it
in India. Charred defatted bone char was
used for decolorizing Sugar liquors
around 1820 (Andersen, 1962).

Effect of fluoride exposure on the intelligence of school children in Madhya Pradesh, India 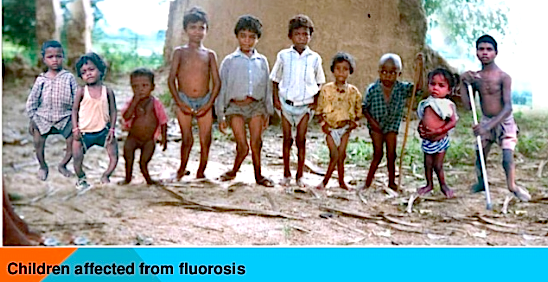 “… in one Indian village studied in detail, Bhanakpur near Delhi, water
with between 0.7 and 1.6 ppm of fluoride was enough to leave 17 per cent
of the population suffering from the bent bones of skeletal fluorosis… ” 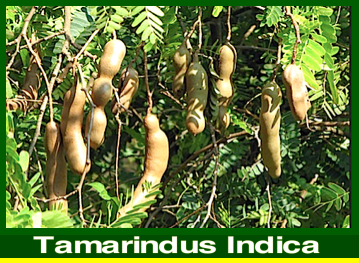 Tamarind (Tamarindus indicus) intake is likely to help in delaying
progression of fluorosis by enhancing urinary excretion
of fluoride. [ This tree grows well in SE Queensland. ]

Friday,  April 2016
Tamarindus Indica L. – A Review Of  Traditional Uses, Phytochemistry And Pharmacology by Emmy De Caluwe , Katerina Halamova , Patrick Van Damme Tamarind or Tamarindus indica L. of the Fabaceae, subfamily Caesalpinioideae, is an important food in the tropics. It is a multipurpose tree of which almost every part finds at least some use (Kumar & Bhattacharya, 2008), either nutritional or medicinal. Tamarind is indigenous to tropical Africa but it has been introduced and naturalized worldwide in over 50 countries. The major production areas are in the Asian countries India and Thailand, but also in Bangladesh, Sri Lanka, Thailand and Indonesia.

In America, Mexico and Costa Rica are the biggest producers. Africa on the whole does not produce tamarind on a commercial scale, though it is widely used by the local people. Minor producing countries in Africa are Senegal, Gambia, Kenya, Tanzania and Zambia.

Tamarind (Tamarindus indicus) intake is likely to help in delaying progression of
fluorosis by enhancing urinary excretion of fluoride.

Turmeric is shown to protect the brain against fluoride poisoning. 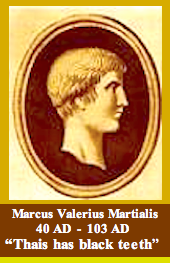 TOTAL AVOIDANCE IS VERY DIFFICULT
IF THE WATER SUPPLY IS FLUORIDATED:

1.)  Absorption Though Skin. Cleaning, swimming, showering/bathing and clothes washing
will result in some assimilation through the skin.

2.)  Boiling water will NOT remove fluoride; indeed it will increase the concentration.
This will occur due to evaporation e.g. electric jugs, kettles, aquariums and
(wet, atmospheric) cooling towers.

MORE ON HOW TO AVOID FLUORIDATED WATER: 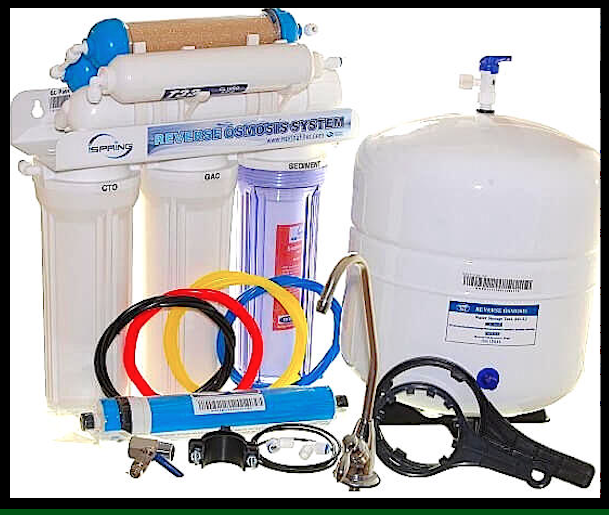 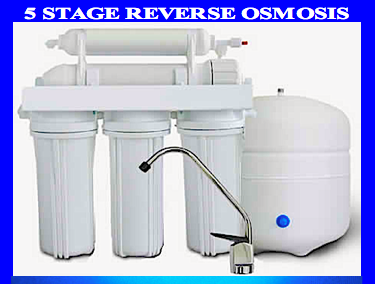 There are thousands of these installed in Australian homes,
- so to try and prove fluoridation is effective,
is statistically impossible. !

1.]  Use Reverse Osmosis Filtration.  It will need regular servicing and wastes 2-4 times the saved water to continually wash the filtering membranes. ( ONLY a 0.0001 micron membrane will remove fluoride, however the 0.0002 micron membranes which are being imported from Asia will not.)

2.]  Drink Rain Water (from tanks). This can be difficult if you live in a town house, a home unit or a rented property. ♦

4.] Buy Bottled Water. Bottled Water is responsible for over 60,000 tones of greenhouse gas emissions every year. Only 35% of plastic PET gets recycled in Australia the rest becomes landfill. Many brands of bottled water are not fluoride free even if they are labelled “Spring Water.” There is a push to fluoridate bottled water. We can presume this will solve the problem for the bottlers who would otherwise need to install and maintain R.O. filters in their bottling factories.

5.]  Move To A Town With No Fluoride In The Water.

TOTAL AVOIDANCE IS VERY DIFFICULT IF THE WATER SUPPLY IS FLUORIDATED:

1.)  Absorption Though Skin. Cleaning, swimming, showering/bathing and clothes washing will result in some assimilation through the skin.

2.)  Boiling water will not remove fluoride; indeed it will increase the concentration. This will occur due to evaporation e.g. electric jugs, kettles, aquariums and (wet, atmospheric) cooling towers.

4.)  Carbon filters will only remove fluoride for the first 30-50 litres. There is some fluoride
reduction (30-40%) progressively failing over time. Carbon filters are therefore
NOT an option for fluoride removal for drinking water.

There are only preliminary estimates available regarding how much F. is absorbed through our skin and lungs when we stand naked in our shower or soak in the bath contaminated by fluoridated water – and we pay for this indignity in our council water bill. –

Dr. Steven Levy, D.D.S., and his team found during their study that “fluoride intakes during each of the first four years (of a child’s life) were individually significantly related to fluorosis on maxillary central incisors, with the first year more important.” They went on to warn that “infant formulas reconstituted with higher fluoride water can provide 100 to 200 times more fluoride than breast milk, or cow’s milk.”

DEFENSIVE DIETS WILL NEED TO INCLUDE:

Vitamin C, Calcium, Magnesium, Iodine, Shilajit [minerals], Boron and Strontium, (not Strontium-90) these will need to be part of the diet of every one who is concerned about this problem. “Boron effectively counteracts symptoms of fluoride intoxication in humans (Zhou et al. 1987) and in experimentally poisoned rabbits (Elsair et al. 1980a, 1980b, 1981). Humans suffering from skeletal fluorosis experienced 50 to 80% improvement after drinking solutions containing 300 to 1,100 mg of borax/L daily, 3 weeks a month for 3 months (Zhou et al. 1987). Boron enhances sequestration of fluoride from bone and excretion through kidneys and possibly the intestinal tract (Elair et al. 1980a, 1981).

THE BORAX CONSPIRACY by Walter Last - Borax is a compound form of  boron, with oxygen and sodium attached. (However EXCESS BORON CAN CAUSE PROBLEMS especially for children. – Conditions like ADHD, dyslexia, autism, asthma, allergies, cystic fibrosis, liver and oseophageal cancer can be triggered or made worse with excess boron. Boron increases estrogen and calcium levels and lowers B6, zinc, and blood glucose.
Signs of toxicity are nausea, vomiting, lethargy, dermatitis and diarrhea.
The antidote is extra vitamin B2. –

Lycopene helps to minimize the toxic effects of fluoride. It is a carotenoid antioxidant that gives fruits and vegetables like tomatoes and watermelon a pink or red colour. It is more powerful than that of other carotenoids, such as beta-carotene. It’s found in tomatoes (especially cooked tomatoes), apricots, guavas, watermelons, papayas, and pink grapefruits.

Bromide used in bread making and PBDEs [flame retardants] like fluorides are toxic antagonists of iodine and interfere with thyroid function. (Fluoride was commonly used to treat hyper-thyroidism in the early and mid-1900s at doses commonly ingested by people today). The Dead Sea is a major sourse of bromide. !!!

The renal clearance of fluoride is high compared with other halogens. ↓

It is directly related to urinary pH. 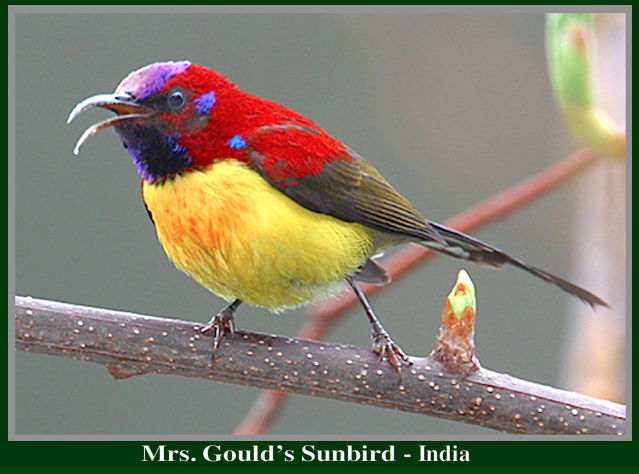